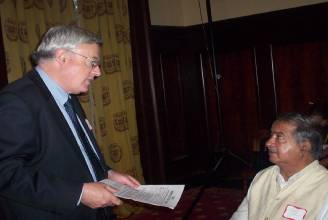 Rights of Persons with Disabilities

Campaigning for International and National Rights of Persons with Disabilities

SMRC has participated in negotiating with States at the UN and in India to bring about a legal framework.

UNCRPD. In 2005 SMRC started to participate in the UN meetings on negotiating the UNCRPD. Most of our work was related to Art 11 on Disasters discussions on defining disability. We were there in the UN the night the treaty was adopted. SMRC was part of the Rehabilitation International team as our ECOSOC accredition came only in 2011. We were accredited members of the Conference of State Parties and join each year to put forward developing countries rights.

In India SMRC campaigned for all the Disability law 1995 and RPWDA 2016.

In coordination with the National Movement a programme was launched for the implementation of the Disability Act with its notification in Orissa in 1997.  Many branches soon were formed – some like Share: (Shared Adventure, Recreation, and Entertainment) which SMRC set up under the leadership of Gourang Sinha, our physiotherapist, in 1996, had a number of later day disability activists who began working on disability issues, Shruti Mahapatra, Innu Singh, Nilmadhav and Indira Pattnaik started with Share.

The forum spread to all Districts and carried out many Campaigns till DPI came into the State and decided they would charter their own course. So we wound up the Forum as duplication of scarce resources is never good.

In the latter most of its work was around the article on rights of women. In the drfat women were missing so SMRC approached the President of India and with the National Committee finally included all articles on women with disability in RPWDA

Voting Rights for Persons With Disability

Political Rights were never thought of as important. SMRC started to campaign for these – visiting booths and demonstrating. We met the Election Commissioner in Odisha and T. N. Sheshan to drive the point home.  The organization spearheaded a statewide campaign on Right to Vote. We had a direct meeting with the Chief Election Commissioner who assured us that; all necessary attention will be paid to enable persons with disabilities to vote independently. However, it did not happen. As part of the direct action with our help a PIL was filed in the Supreme Court, which has directed the Election Commission of India to implement the recommended infrastructure for the purpose.

The road safety week is observed and aimed at reducing the incidence of disability. The organization along with the school children organized awareness on prevention programe on road accidents, non- use of helmets and seat belts as well as non-adherence to rules and regulations which results in death.

Prevention of disability has always been an important component among the disability issues. SMRC worked on different fronts and platforms to achieve this goal. This included prevention of childhood disability, of accidents and promoting industrial safety.

Usage of helmets and seatbelts was promoted at national level ministries and sensitizing people at local level. India was still not prepared so we moved to the national level to take up the matter with the automobile industry and the Transport ministry. In Bhubaneswar school children assisted in creating public awareness.   The schools helped out with children promoting the idea at all petrol pump stations.  The children underwent training in first aid and awareness on importance of road safety rules and in first aid with help of St. John’s Ambulance.

In 1989, Critical Care became an important prevention programme. This programme was conducted with the National Association for Critical Care Medicine, Delhi. Dr N.P. Singh a pioneer in the work backed us in our work, providing technical expertise for training of medical practitioners and para medic workers.

The second major programme was in critical care with focus on prevention of SCI. It extended to safety programmes of electricity workers and industry on ‘Voluntary Compliance’ in use of Safety Equipments and Aids in industries.  In the second part of the safety programme, prevention of SCI became a major programme guided by Sir George Bedbrook and Perth Hospital Australia linked up on accident site management.

SMRC spearheaded the physical accessibility movement in Odisha and at the national level. Our Founder was invited by Late Shree Y.D.Sharma, Governor of Orissa to meet him. He sat before the flight of stairs when the ADC expressed he could be carried up. He told the ADC that it will not be a very dignified entry in to the Raj Bhawan. The Governor enquired what our Founder had said. Soon after he ordered a ramp to be constructed – An extremely sensitive gesture.

In other cases we had to protest for instance outside the Assembly, certain hotels and the BDA. As sensitivity grew the Big Bazaar (A mall) not only made it fully accessible but invited us to test the accessibility.

In our work, ICTA (safety etc)  initially played an important role as did our interaction with David Werner (wheelchairs) – the two who spearheaded the accessibility movement worldwide.

SMRC has been campaigning for the Rights of Disabled in Disaster Preparedness and Management and since 1999.

In 1999 a cyclone of an intense magnitude hit the coast of Odisha in India.  The response to the ‘super cyclone’ did not include the disabled, though SMRC as member of the UN and State Coordination Committee tried that disabled be included in policy and implementation. As there was complete chaos, disability was an issue far from policy makers, implementers and donor’s views.

Despite SMRC’s campaign the response was simply not there. SMRC with financial assistance of Cord Aid and later Action Aid started to provide relief and rehabilitation to the disabled affected by the cyclone. We resettled about 3000 persons with disabilities in the process, in the area of Jagatsingpur which was affected the most.

The methodology was comprehensive rehabilitation of disabled from medical treatment, barrier free housing to social inclusion. At this stage preparedness could not be taken up. In 2004 after recurring floods had hit the State and in India disasters were coming to the forefront, SMRC then initiated a full-fledged campaign on disaster preparedness and response. Since 2004 its work has included Lobbying, Research, Advocacy and Training. It developed a Training Manual and a tool kit to address needs of disabled.

Lobbying has been at International, National and local levels. We are proud that we played a role in introducing Article 11 in the UNCRPD which promotes inclusion of disability issues in emergencies, conflicts etc. We also promoted the idea at the RI Assembly and especially the Global Forum for Health Research conferences and research. In this Don Mackay gave a patient hearing and Tomas helped us promote the idea in RI and Mary Anne Burke in the Global Forum. Maria Reina (Syracuse University), Anne Hayes (USAID), Judith Heumann (GPDD) Pia Rockhold (World Bank) and Moira Horgan Jones (DPI) many others assisted in moving the Campaign forward.

In India, General Vij, Chairperson of NDMA, the apex authority in India assisted in including it in the National Act and made our founder a member of the Task Force which would oversee disaster issues in India. OSDMA under Aurobindo Behera and Sunderay assisted in its inclusion in the Orissa Relief code. G. Padmanabhan at UNDP included the issue in the E solution and the World Bank carried out a special e discussion with us as one of the partners (Others being CIR and IDDC).

SMRC participated in all disability and disaster related advocacy in the Stakeholder meetings and in the Sendai Framework and the Incheon Strategy.
Women with Disabilities Campaign
Today, as part of our Advocacy of disability rights, we have created a platform for women with disabilities who we feel will lead this movement to ameliorate their rights and for all other people with disabilities irrespective of their gender, socio-economic status, caste, colour, religion or creed. In 2004 in Goa at the Indian Association of Women’s Studies meet, Asha Hans (EVP, SMRC) brought together for the first time the women from the disability movement and feminist movement of India.

The “Azadi Ki Udaan” Campaign aims to build the capacity of Women with Disabilities (WwDs), promote their right to health and advance zero tolerance for violence. The main goal of the Project is to facilitate the agency, empowerment and inclusion of WwDs. It promotes access to critical services such as access to health care and protection against violence and abuse taking a multidisciplinary approach through six primary objectives. Direct beneficiaries of the Project include more than 1,400 WwDs and 80 disabled people’s organizations and over 50,000 WwDs as indirect beneficiaries in the four target states of Odisha, Karnataka, Gujarat, and Telangana.

Two-days National Workshop of Leaders of Disability Movement organized at New Delhi on 26th and 27th February 2015 to initiate the Campaign on Domestic Violence and Women with Disabilities. The Campaign includes 3 components: