Building Capacity of Women with Disabilities 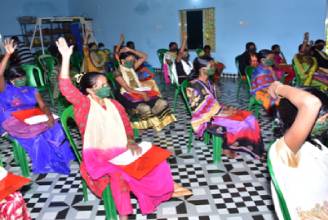 SHANTA Memorial Rehabilitation Centre (SMRC) has always focused on Gender in the context of disability in all its work since 1985. In 1986 in its first rural program it initiated a major Women’s Self Help Group supported by SIDA. One special program for women with leprosy. In all other programs women with disabilities participated in large numbers.1991 it spearheaded a women with disabilities campaign in the State (Odisha) to bring visibility to their issues.

From 2005-2006 it participated in the UNRPD drafting meetings in the UN especially article 6 on women and Art 11 on Disaster and followed with attending the States Conference in 2008, 2009 and 2010

1996 a National Conference on Media and WWD was organized where women from across India participated and laid guidelines for Media.

2004 at Goa it conducted a sub theme “Intersecting the women with disabilities movement with women’s movement in India” at the Xlth National Conference of the Indian Association of Women’s Studies. It followed this with promoting a plenary speaker at the 2006 meeting.

2006 as part of its Global Campaign on Disability and Disaster it presented a paper “Inclusion of Disability and Gender in Disaster Management and Response” Prof. Dr.Asha Hans & Ms.Reena Mohanty First Disaster National Congress organized by Ministry of Home.

2008 The Need for a Framework for combined disability and gender budgeting by Asha Hans, Amrita Patel and S.B.Agnihotri was published in the Indian Journal of Gender Studies, Vol. 15 No.2

2007 based on the survey with the assistance of Rehabilitation International a program relating to Women with Disabilities was initiated in four States of Chhattisgarh, Andhra Pradesh. Orissa and West Bengal

2009 with support from UNDESA and Rehabilitation International it carried out a Women with Disabilities program related to Livelihood in four States of India.

2010 it received Disability Rights Fund (2010-2012) for training women in UNCRPD and forming a national network.

2017 With the support of PSI & USAID work was carried out on finance Literacy training so linkage with  their entrepreneurship so bank & government schemes could be explained women with disabilities.

2016- 19 With the support of Common Wealth Foundation consultations were organized  with grass root women with disabilities from all the states of India to use human rights mechanisms on Article 6 in response to the India UNCRPD Review.

2018 With the support of PSI & USAID we are working for the Adolescent girls and women by Building their capacity on SRHR. Awareness in schools on SRHR.

2019 With the support of USAID we are working for the Women with Disabilities in India by Building their Capacity : Promoting their Right to Independent Living in the Community and Ending Violence.

2021 With the support of Common Wealth Foundation Developing a Guideline for women with disabilities for use in Emergencies such as COVID 19.

2009 Made a presentation on Livelihood of Women with Disabilities at International Forum of the Shafallah Center, in Doha, Qatar.

10th March 2010 the 100 yrs of International Women’s Day was a global day celebrating the economic, political and social achievements of women past, present and future, a special program for the Women with Disabilities was organized

Technology is very important for women with disabilities. As part of projects SMRC has developed learning apps on rights and provided training on use of smart phones and the apps

In 2020 An accessible mobile app has been produced on sexual and reproductive rights.