Living Independently and Being Included in the Community 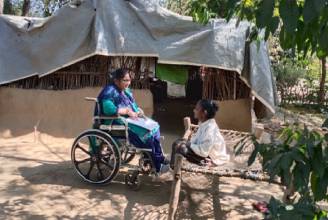 Project Building the Capacity of Women with Disabilities in India

This two year project Building the Capacity of Women with Disabilities in India: Promoting their Right to Independent Living in the Community and Ending Violence2019-2021 is being implemented in three States of Odisha, Gujarat and Telangana and is being been supported by USAID. It is based on the rights of women with disabilities.

Most women with disabilities have no right to independently live in the community or access to shelters as they are institutionalized. They are abused, and face barriers to autonomy, agency, and empowerment at home, at work, in their communities, social lives, and even within the paternalistic disability sector. They face extraordinary violence which becomes a cause of disability as well as a consequence of disability-based persecution and institutionalization.

The opportunities and accessibility for girls and women with disabilities are therefore extremely restricted, while prejudice against this group is overwhelmingly present. In a report drafted by SMRC in 2019, consultations with 460 women with disabilities across India revealed a consistent pattern of egregious discrimination, violence and abuse, coupled with stigmatization and wholly inadequate access to Article 19. Its major aim was to look at ways to de-institutionalize women if they have been abandoned in shelters, mental health institutions. This project has been drawn from needs drawn from this report.

Knowledge about rights and resources in this case LIBC is necessary to truly empower women and girls with disabilities. However most women with disabilities lack autonomy and are not allowed or considered capable of making their own decisions by society, so they tend to be isolated without strong social networks to tap into, especially with other women with disabilities. Besides, the environment they live in is insensitive and they need support of sensitive government officials and DPOs.

From the work of Women with Disabilities India Network and responses on Article 6 it has been observed that Women with disabilities face obstacles in accessing housing and allied services especially access to shelter. As their access to housing and shelter is not included in national data bases, there is a lack of information and rarely are the women included in any training programs of government and even NGOs. Without housing they may be institutionalized and abandoned leading to a variety of human rights abuses including forced abortion, forced treatment and forced detention on the grounds of care and protection regimes, and rarely are they taken back home and their human rights violated across the board.

Housing in itself does not solve problems if you do not have other entitlements as accessible transportation, right to vote and interact with the community or cultural rights. To empower women with disabilities with capacity for independent living there is a need to access Livelihood. This will enable them also to access Housing and Shelter an important component of LIBC so that they are not institutionalized

The program facilitates the agency of women with disabilities through capacity building, a strong network, sensitized government officials and access to knowledge and resources.

COVID 19 and Impact on the program
As COVID 19 impacted the country, it also affected the program. For nearly six months work could only be done over the telephones. A soon as numbers affected by the virus came down work started full scale in all the States. A rapid study was done on the impact of the virus on the women in the program. This gave an overview of the impact and a way forward. Some new issues were taken up such as increasing the livelihood and priority of vaccine to disabled. It also took up the challenge of making the tele-medicine being increasingly used by governments accessible to persons with disabilities. Sixteen days Violence against women with disabilities was supported by Prajyna a feminist organization.