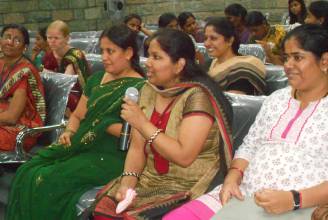 Presently it has members across India who are leaders in the field of disability. The network’s mission is to work with solidarity on issues of gender, with an aim to create a world that is non-violent just and equal.

To promote the human rights and fundamental freedoms of Women with Disabilities. Develop Policy and monitor human rights

Its collaboration will be with DPOs, and wide range of women’s organizations and networks.

The Network met for the first time in New Delhi on 1 October 2012. It works on two levels:

Besides discussing the work of the WWDIn Network the group has provided input into the following;

THE CEDAW Alternative Report being prepared by the women in India led
by the National Alliance of Women’s Organizations. The information
collected is feeding into a :

Provided input into the Verma Commission Report set up after the rape of young girl in Delhi, so that the existing criminal law could be changed

Its members met Rashida Manjoo SRVAW in four of the six meetings she organized in India. In Delhi, Mumbai, Chennai and Imphal. At each meeting 2-3 members had made presentations. Anjali Aggarwal and Seema Baquer in Delhi, Kanchan Pamnani with 2 psychiatric survivors who deposed in MumbAi, In Chennai Meenakshi Balasubramaniam and Smita and in Imphal Sunita Devi met Ms Manjoo.

Interaction of the network with other networks as Women Enabled International, Asia Pacific Disability Group

Its work is prioritized by its members

To support the work of women with Disabilities India Network at the national and State levels so that they can collaborate and participate actively.

To build together on their knowledge to inform the Indian Parliament, Government officials, public and UN bodies on issues where they have developed a common stand.

Its work in general will include to